1st September 2010 – EUCAR participated today in the European Parliament Hearing on “Simplifying the implementation of the Research Framework Programmes”.

EUCAR participated today in the European Parliament Hearing on “Simplifying the implementation of the Research Framework Programmes”, represented by Professor Jürgen Leohold, EUCAR Chairman in 2009 and Executive Director of Group Research Volkswagen.

The hearing was hosted by MEP Maria da Graça Carvalho, former Minister of Science & Higher Education in Portugal, who is the draftsperson of the Parliament’s own report on simplification. Professor Leohold presented six main topics on behalf of EUCAR: reducing bureaucracy; the use of usual accounting procedures; reducing time to grant; a response to the proposed extended use of lump sums and result-based funding; future management of public-private partnerships; increase in the tolerable risk of error for research funding.  The EUCAR presentation appeared to be well received by MEPs and received particular thanks from Angelika Niebler, former chairperson of the Committee on Industry, Research & Energy.
In total nine experts from academia, research centres and industry presented at the hearing, with many issues being common to most speakers, who were in general agreement with EUCAR on the use of usual accounting procedures, reducing the variety of rules, consistent application of rules, the long delays in starting funded projects and the heavy burden of financial control. Most speakers were also clearly against the general use of results-based funding for research programmes. The new European Commission Director General for Research, Robert-Jan Smits, put forward his five priorities for simplification: keep simplification on the political agenda, ensure one voice from the Parliament, base changes on facts not hearsay, only bring in new procedures if proven at national level and decide on the best time to introduce changes. The Parliament will complete its report this month and further discussion will take place with the Commission and member states to determine further EU policy on simplification and its implementation. 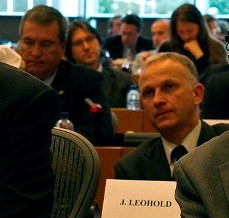