EUCAR receives the “2015 Excellence in ITS Achievement” Award 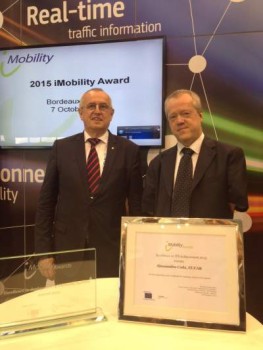 The event has been chaired by the European Commission, Wolfgang Höfs, Head of Sector “Strategic Planning and Communication” in the Directorate-General for Communication Networks, Content and Technology, who highlighted the importance of the iMobility Award in recognising and promoting ambitious and innovative ITS deployments, paving the way to safe, smart and clean road mobility.

After congratulating all 14 nominees, paying tribute to their high calibre and professionalism. W. Höfs handed over the Award to Alessandro Coda, for his work in defining the roadmaps of future ITS research.

A. Coda coordinates the research and innovation activities of the European vehicle manufacturers and is also Chairman of the Research and Innovation (R&I) working group of the iMobility Forum. He worked on the harmonised roadmaps to support the EU policy priorities for Horizon 2020 and beyond presented at the iMobility plenary meeting in January 2015.

The outcome was the result of more than one-year work of the working groups that identified European activities for research and development, large pilot scale actions, standardisation and deployment in seven main areas.

A. Coda thanked all the DGs of the European Commission, the EUCAR Members, the participants to the R&I WG, and ERTICO.

Although he was grateful for the work performed in the past, A. Coda urged the ITS community to focus on the future and called upon all stakeholders to continue to work together to effectively implement ITS in Europe.