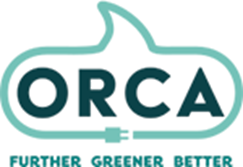 The ORCA project focuses on advancing the efficiency of plug-in hybrid electric Commercial Vehicles. Representatives of the automotive value chain (OEMs, suppliers, and research organisations) joined forces to develop improved propulsion systems for multimodal buses and distribution trucks. These vehicle’s systems were optimised to increase three times the range in full electric mode of a bus and a distribution truck. Advanced control systems were developed and implemented in both vehicles to optimise their operations in low emission zones. As a result, ORCA prototypes achieve a 40% reduction in fuel consumption and emissions. The project also assessed the total cost of ownership (TCO) for these prototypes, which remained the same compared to their conventional counterparts.

During the final online event, a movie describing the project and its results was released. You can watch it here: https://youtu.be/7tbfPc_6Jpo.

This project is co-funded under the European Union’s Horizon 2020 research and innovation programme under grant agreement No 724087. For further information on the project, please visit the project website.